Home-cooked meals have been sparse these days. When they do happen, they need to be fast and easy. Nothing that involves chopping too many ingredients and standing in the kitchen for too long. This is one of our simple and satisfyingly tasty, go-to recipes: the one pan couscous with pine nuts and raisins. A great blend of the sweet and savory.

In the spirit of this recipe’s ease, this will be a short and quick entry.

One Pan Couscous with Pine Nuts and Raisins

1 1/2 cups of couscous
2 1/2 cups of broth (I used vegetable)
2-3 tablespoons of pine nuts (depends on how much you like them)
1/4 cup of raisins (pre-soaked in hot water)
1-2 tablespoon of chopped scallions
1 tablespoon parsley, preferably fresh and finely chopped
2-4 tablespoons of olive oil
salt and pepper to taste

Heat one tablespoon of oil in a large pan.
When ready, add the pine nuts.
Toast them in the pan until slightly brown.
Remove with slotted spoon and set aside in a small bowl.

Add the broth.
Mix it evenly into the pasta.
It’s okay if there is some extra liquid floating around.
The couscous will absorb the broth.
Place a cover on the pan and let it sit for 15 minutes.

When the time has passed, lift the lid and with a fork,
move the couscous around, fluffing it up.
Let it sit covered for another 5 minutes.

Then add the toasted pine nuts, drained raisins and scallions.
Add the remaining oil and salt to taste.
Voila, all cooked in one pan and ready to eat! 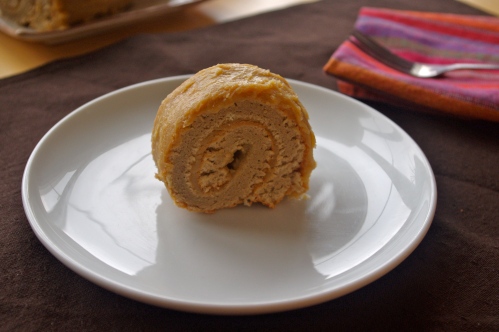 My dad has four sisters. When I was 5, one of them came to live with us. She came straight from The Philippines and moved into our tiny NYC apartment. Her name is Eloisa, however, in our family and with other Filipino friends, we never called people by their officially documented names. Everyone in our Filipino-American world had a nickname and it would be a long time until you found out a person’s “real” name.

My aunt was the second to the youngest in her family, but for some reason they called her “Baby,” just like in the movie Dirty Dancing. Out of respect for our elders, we always addressed our aunts by first using the word Tita which is aunt in Filipino and then by their nickname. Somehow, my brothers and I started calling Tita Baby, “Tita Babe” and eventually she became “Tita Babes”.For the three of us, Tita Babes was like a third parent. She moved to the States to be closer to her family and to help my parents out. Much of the immediate family had emigrated earlier to Toronto, Canada or NY. She was the last to relocate. The year she came to live with us, was also the year my mother started a full time job. Tita Babes became our own Mrs. Garrett (see TV show Facts of Life , if you don’t know Mrs. G.) She brought us to and from school, took us to the library, spent hours with us at the park, walked us to the local Baskin Robbins Ice Cream Shop and cooked a lot of tasty meals for us. Tita Babes is one of our family’s finest in the kitchen. When we got to our teens, Tita Babes left and moved into another apartment with two other sisters. We are still very close to her and she holds a very special place in our hearts.

Found this photo of the three of us with Tita Babe, the youngest one is hiding behind the stroller

Over the years, I have collected many recipes from my special Tita. Just a few years ago, she started experimenting with baking and last summer I got this recipe from her. We typically celebrate birthdays in our family with an ice cream cake or a mocha cake from our local Filipino bakery. I was surprised to find a recipe for mocha roll stuck to her refrigerator door. The combination of a mocha sponge cake and mocha buttercream frosting often graced the tables of many Filipino celebrations and was served in different ways, such as a roll, sheet cake or layered cake. This one is for the mocha roll.

The recipe I scribbled down

Lately, I have been thinking a lot about Tita Babes and missing her. I am also thinking about my babies, still in my womb and this ex-pat life that my husband and I live. Separated by borders, an ocean and a time zone, we live kilometers away from our families. I can’t help but wonder if they will be lucky enough to have a Tita Babes in their lives too.

Cake:
Line a large jelly roll pan with parchment paper or grease it with butter and sprinkle with flour.

Dissolve coffee granules with hot water, from the tap is fine.
In a bowl, beat egg whites on high for about 3 minutes, until they are stiff.
In another large bowl, combine egg yolks and sugar.
Beat on high for 3 minutes.
Then add flour and stir.
Fold in the egg whites and carefully blend all the ingredients.
(I use a spatula)
Finally, add the vanilla and dissolved coffee granules.
Gently mix all the ingredients together.
Then pour into pan and spread the mixture evenly.
Bake for 15 minutes.

Filling/Frosting: (You can start the filling while the cake is baking or cooling off)

Dissolve granules in a drop of hot water
and then stir into the cream.
With an electric mixer, cream the butter.
Then add sugar and continue mixing.
With the mixture running, slowly add the coffee
and cream mixture, tablespoon by tablespoon.
Otherwise, it may curdle and you will have to start
all over again.

When the cake is done, run a knife along the edges to loosen it up from the pan.
(You will have to invert the cake onto a clean kitchen towel,
so have that ready on your counter.)

Place the towel over the pan.
To ensure a good catch, I also place my cooling rack on top of of the towel.

Then hold the pan on the short end and flip it over.
Remove pan and then peel off the parchment paper.

Starting with the long side, begin to roll the cake up.

Let the cake sit in this position for at least 20 minutes or until completely cool.

When ready, carefully unroll the cake. Don’t worry about cracks, you can cover it up with the frosting.

Then spread a thin layer of cream in the middle and sides of the cake.

When it is all covered with cream, roll it up again and cut the ends off.

With the seam of the cake facing downwards, use the rest of the frosting to cover the cake.

Before serving, refrigerate cake for 30 minutes to let the frosting firm up.
You can run a fork along the cake to add some fancy ridges.
Leftover slices can be refrigerated or kept in the freezer for up to a month.

Filed under Pinay at Heart

Lately, cooking hasn’t been my thang. Since getting pregnant, the fragrances I once enjoyed stirring up in the kitchen are not agreeing with me. However, since I woke up from the first-trimester zombie state, baking has been something I can tolerate.

I think I have hit what they call in the pregnancy world the “nesting phase.” My husband and I have been steadily sorting and throwing out some of the “precious” junk items that we accumulated over the years. This also includes sifting through the giant food collection in our pantry.

I noticed there was a 40 ounce bag of Hershey kisses sitting on the top shelf. For some bizarre reason, my mother sent me these in a care package. I never had a history of liking milk chocolate Hershey kisses. I am a devoted lover of dark chocolate, so it was odd to receive such a huge bag. They must have been on sale and since we got them, the kisses have never been touched.

What to do with a 40 ounce bag of Hershey kisses? Oh, what do we have here… a recipe for Peanut Butter Blossoms??? Luckily, the bag of kisses had not surpassed the expiration date. I can pinpoint the exact moment I first tried these treats. It was just over 7 years ago when I was teaching Kindergarten in Washington DC. That December, a student’s mother made me a box of assorted home-baked cookies, including peanut butter blossoms.

My Filipino-American household was full of delicious home-cooked meals, but home-baked goods rarely made an appearance. I think the closest thing we ever tried came from a refrigerated pack of cookie dough and that only happened once or twice. In the Philippines, my mom didn’t grow up with an oven at home, they were not part of the usual household kitchen items. Imagine, all that tropical heat to bare and more warm air coming out from an oven! I barely recall my mother or grandmother ever using the one in our NYC apartment. Baking was not their thang.This is not to say that I was deprived of cookies when I was young. I had my fill of them when I visited the homes of my classmates. It was just something I never really grew up with.

It wasn’t until my mid 20’s when I started to bake and I have to admit it happened because I was sort of “forced” into the act. Cooking and baking became an important part of my Kindergarten classroom curriculum. Through this process the children were experiencing reading, math, science, art, writing and dramatic play in a fun and creative way. And along the way, I discovered a new interest. I love that saying “All I really need to know, I learned in Kindergarten.” In reliving Kindergarten with my students, I developed a new passion and although it came later in life, I am very thankful. Now, I’ll be one of those mamas with home-baked goods waiting in the cookie jar for little hands to attack! 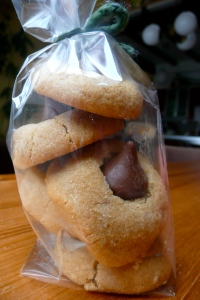 Directions:
In a large bowl, beat butter and peanut butter.
Add both the sugars and beat until fluffy.
Add the egg, milk and vanilla, continue to beat well.

In a small bowl, mix the flour, baking soda and salt together.
Then gradually beat the flour mixture into the peanut butter mixture.

Refrigerate for 10 minutes.
Unwrap the Hershey kisses.
After 10 minutes, take out the mixture and shape into 1-inch balls.
Roll in granulated or fine brown sugar.

Place on lined cookie sheet.
Bake for 8-10 minutes or until lightly browned.
As soon as the cookie sheet is removed from the oven,
place Hershey kiss into the center of each cookie.
Cookie will likely crack around the edges.
Remove cookie from sheet to a wire rack to cool.